This is Zlang Zlut's 2nd full-length release, released on 5th february 2015, featuring 11 somewhat rougher, harder and heavier songs than it's predecessor, the opener "Hit The Bottom" being the single and video also, the bluesy "Freedom Is A Bitch" featuring Sämi Schneider on bluesharp, the prog-ish "Now" and "Everlasting Dream", the heavy-hippie rap-ish "Rage", the Saxon cover "Out Of Control" (from their '81 album "Denim And Leather") and the Quo tribute "Get Down" finishing the album. It was recorded and mixed between August and October 2015 by V.O. Pulver at Little Creek Studios in Gelterkinden, Switzerland.

This is the first full-length album of Zlang Zlut, released on 6th of may 2013. It's got 10 songs, three classic hard rocking and rolling tunes ("Let It Go", "Danger" and the rhythmically slighty twisted "Rock It Down"), two numbers with a more 90's-edge ("Flood", "Mad"), the epic "Raptor", "Out On Time" and the somewhat prog-ish "Pretend" featuring lengthy, orgastic Schneider solos as well as two ballads ("Through Your Hands" and "Lord Knows"), the latter featuring Lorkovic on vibraphones and Schneider on acoustic cellos. It was recorded between July and September 2012 at Foolpark Studios in Lucerne by Deezl Imhof, mixed and mastered by V.O. Pulver at Little Creek Studios in Gelterkinden in December 2012. 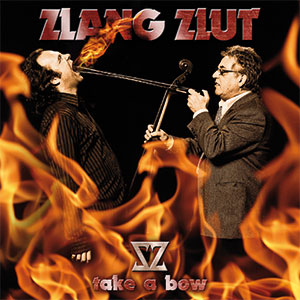 This is Zlang Zlut's first release, the 4-track-EP "Take A Bow", recorded by Dave Muscheidt in December 2010 at Megapeng Studios in Basel. This is pre-Moog-Bass-Pedal-age, there's exclusively E-Cello, drums and vocals on the tracks. "Revolution Baby" sticks out with it's catchy chorus, soon to become an audience favourite in their live shows, they used the song also for their first video clip. "Reasons" has a punk-ish-meets-irish-folk-vibe, "Don't Think Twice" is an early Zep-ish slow rocker with a 3/2 twist, "Fading Away" is Beat's only attempt on Wah-Wah-ing the Cello to date.